Remains of the Pianciani family’s IX century castle are still visible in the estate . It was destroyed in the XV century because of rivalries over the control of the Via della Spina, a major arterial road connecting Rome to the Marche and the Adriatic sea which has been used since Etruscan and ancient Roman times. It is believed Hannibal travelled along the Via della Spina while marching to Spoleto after the Trasimeno battle – as shown in a map exhibited in the Vatican Museums.

In the early XVII century, the Pianciani – among the most important families in Umbria – were granted building permissions for Villa Paradiso to be constructed on some roman and medieval remains. The Villa became one of the family’s summer residences for the following centuries.
Luigi Pianciani fought alongside Mazzini and was the first mayor of Rome after the unification of Italy (1870). 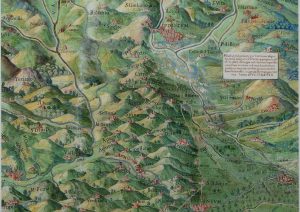 In 1911, once the Pianciani family was extinct, Villa Paradiso and its vast agricultural estate were bought by the Bachetoni Rossi Vaccari family, the present owners.
In 1970, the Villa’s restoration was supervised by the architect Tomaso Buzzi who designed the octagonal opening in the ceiling of the ballroom.